The electrical resistance of an object is a measure of its opposition to the flow of electric current, It is an electrical quantity that shows how the conductor reduces the flow of the current through it.

According to Ohm’s law, The resistance R of an object is defined as the ratio of voltage V to current I through it.

What Does Electrical Resistance Depend on?

The resistance of an object depends on the material it is made of, while some other factors can affect the value of the resistance. These factors are:

Effect of Temperature On Electrical Resistance

In metallic material, any temperature rising offers more resistance to the movement of electrons causing the current, so with increasing temperature the resistance of metallic conductor increases.

This is the reason of using cables derating factors tables when sizing cables for electrical loads.

These factors make correction to the current carrying capacity of the cable according to the surrounding temperature.

The conductor resistance is directly proportional to its length. The longer the conductor, the higher its electrical resistance.

This means that the longer the cable the higher the voltage drop across it due to the resistance.

So in case of selecting a cable for a motor, you should select the cable then calculate the voltage drop, if it’s higher than the accepted value, you should chose the cable with a higher cross sectional area because, it has smaller resistance.

As I mentioned above, that you should chose the cable of a higher cross sectional area to decrease the resistance and overcome the voltage drop problem.

This means, the resistance is inversely proportional to the cross sectional area of the conductor.

The larger the cross sectional area of the conductor the lower its resistance.

A resistor is a piece of conducting material of a particular electrical resistance meant for use in electrical circuits.

Electrical resistors are made of a variety of materials depending on several factors such as the desired resistance, amount of energy that it needs to dissipate.

How to Measure Resistance?

Ohmmeter is the measuring instrument to measure resistance. However A resistance can’t be measured in an operating circuit, i.e to measure a resistance it should be isolated from other circuit components.

If a resistance is in a circuit, and you have to measure it, then applying Ohm’s law is your best choice.

By measuring the voltage (V in Volt) across the resistor (R in Ohm) and the current (I in Amp)passing through it.

Ohm’s law is the way of calculating a resistance.

Assume we have an electrical circuit with a battery of 12 V, and a current of 2A, applying Ohm’s law;

What is Resistor color code?

Resistor color code is a a simple method to quickly identify the resistor value without using any measuring tools.

This color identifying process determines the value of resistance and tolerance of a its value.

We can calculate the value of resistance for each resistor from the color pattern.

Is using color code Worthy to use?

Trust me, I found It a boring thing to measure each resistor to know its value while you have a lot of them on the working table. Color code is the magic stick that saves time and effort.

The electrical components are often coded with colors or numbers to identify their functions and values.

The same is the case for resistors. The rating and values are often written on the resistor as a color code, you can use the resistor color code method to find the value of the resistor quickly without the need of any multimeter.

How to Find the value of a resistor using color code?

BB ROY of Great Britain had a Very Good Wife”. While the Color code table is given below.

Should I use color code or Ohmmeter?

Resistors are used in almost all electronic circuits like capacitors and transistors.

Not like other electronic components, there are many values of resistors. So, its much easier for you to use color code than using an Ohmmeter to measure each single resistor individually.

Ohmmeter using is easy but, in case of making a large electronic engineering project which has many resistors I highly recommend using color code to identify the resistors. 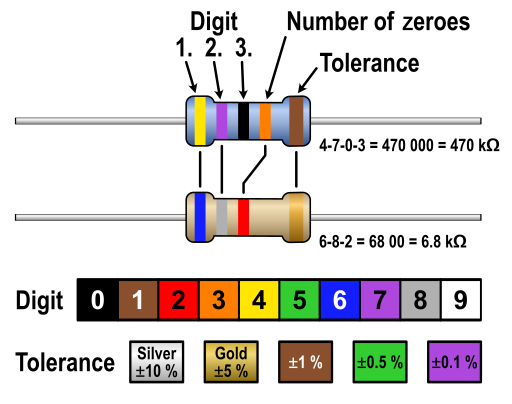 Which has higher electrical resistance copper or aluminum?

This means, if we have two conductors, one of copper and the other is from aluminum with the same length and cross sectional area, then the copper conductor resistance will be lower than the aluminum conductor.

This is why copper is preferred in electrical motors and transformers winding, the copper winding helps in designing the motor or transformer smaller in size.

Do resistors reduce current or voltage?

Resistors affect both current and voltage in different manner. The current in a series circuit will be the same at any point, while the voltage will drop at the end of the circuit.

If the resistors are connected in parallel, they will reduce the passing current while the voltage across them still the same.

I have written a detailed article about series and parallel connection of resistors, I highly recommend reading it from here.

Why does resistance of a conductor generate heat?

Physically, the current passing through any conductor is the flow of electrons. This flow causes some collide with atoms, impurities and other electrons generating heat.

Electrically, Heat is generated in an electrical conductor due to current passing through it is electrical energy losses.

This energy losses happen in all electrical equipment like motors, transformers, OHTL and power cables.

Even in small electronic devices there are heat generation due to electrical resistance. You can find this energy loss in your cell phone charger, it gets hot while charging your phone.

This explains the reason of cooling electric equipment such as motors and transformers. The cooler the equipment the lower its resistance and the lower power losses.

How does temperature affects resistance of a conductor?

The higher the temperature rise of a conductor, the higher its resistance. As I mentioned above, the electric current is electrons flow, heating the conductor up causes the atoms to vibrate more and more, this vibration makes it harder for electrons to flow, causing the resistance to increase.

We use derating factors for cables when choosing one for a load. The temperature derating is one of the factors we apply to adjust cable current ampacity. I have written a detailed article about Cables Derating Factors, you can check it for more information.

What is the electrical resistance of human body?

If your skin is wet this makes it more conductive and lower in resistance. Also men’s skin has a higher resistance than women’s skin.

Some resistors are made from semiconductors, exhibit photo-conductivity, which means that their resistance changes when light is shining on them, the more the light the less its resistance value

Therefore, they are called light dependent resistors (LDR), and are used in light detecting circuits. And the most common usage of them is in light auto control circuits.

The symbol of LDR in electrical circuit wiring diagram.

LDR or Light Dependent Resistor (popular as photoresistor) is an electrical device whose resistivity is a dependent on the light falling on it.

In other words they are light-sensitive resistors , Also known as photo-conductive, photo-conductors cells (or photocells), they are made from semiconductor materials with high resistance values.

What does a light dependent resistor do?

LDR (light dependent resistor) are used for detection of light levels, for example, in automatic street and factories lights, to control lights switching on and off.

In the dark hours and low light levels the resistance of an LDR is high and little current can flow through it, while the resistance decreases as the light increases.

Value of (LDR) light dependent resistor in dark and light

Depending on the light and darkness, a photoresistor resistance can vary from about 100Ω in the day light up to 10MΩ in complete darkness.

How to use LDR?

The resistance of photo-resistor (LDR) drops in light, which means the current to increase (I=V/R), while in darkness LDR resistance increases.

This variation in value is used in electronic circuits to control a relay which is used to switch on and off the lights.

How to test a Photoresistor?

All you need to do is to measure the LDR by the multimeter in light, put a paper on the resistor to disable lights and check it again, its value should vary.

Does an LDR have polarity?

Resistors have no polarity and LDR is not an exception, i.e it has no positive or negative sides.

A photoresistor (LDR) is just a special resistor type, and hence has no polarity that means it can be connected or measured in any direction.

Is a light dependent resistor analogue or digital?

Light dependent resistor is an analogue electronic device that varies between 10MΩ and few Ohms.

This makes its value has many possible states. LDRs are a good analogue sensors.

Does LDR glow in dark?

LDR doesn’t glow in dark. Why should it glow?, It controls the lights and other loads depending on its value.

Depending on the circuit design, the the load activates in dark or light hours.

I will be happy if you subscribe to my electrical channel.

Circuit Breaker: 18 Answers You Should Know